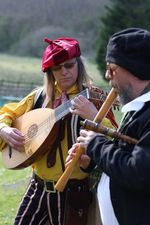 Princes in the Tower

The band, an offshoot of the Medieval-Psyche-Prog band Circulus,

is only ever contented when it has made its audience smile. ‘There’s a definite Monty Python-meets-Dorothy Perkins aspect to them!’ (Chris Morris – at a banquet))

This ‘Tudor power trio’ regularly brings a rowdy peak to many a London bash, festival and historical event.

At Port Eliot Festival, Princes in The Tower performed an upbeat version of ‘Sumer Is Icumen in,’ with Jarvis Cocker acting as a microphone stand!

The song received rapturous applause, whilst curated by ‘Lord Pulp’ during his Sunday Service, which was broadcast on BBC 6 Music, live from the festival.

Always appearing in full costume, this eccentric and always-entertaining trio has played at many cultural events, in Britain and around the world, as well as taking their ‘Tudor Music Workshop’ into schools.

Their Early Music repertoire ranges from Medieval, through Renaissance to early Hanoverian.

Appearances on ‘The One Show,’ ‘Poldark’ and ‘Imagine’ for the BBC.

British Library  – appeared (in their augmented line-up, as Circulus) 500th anniversary of Henry VIII’s ascension to the throne.

The House of Fairytales. Collaborated for the past five years, including the sell-out 2,000-seater Barbican event, ‘A Twisted Christmas’

Princes were parodied by The Mighty Boosh.

Princes In The Tower’s album is out on Bandcamp.